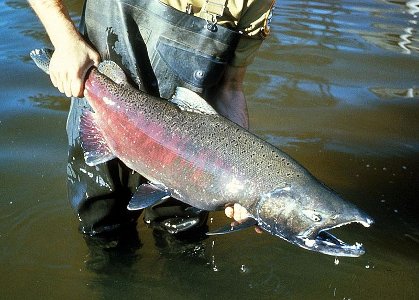 East Grand Lake provides one of the best salmon fishing in Maine.

During the past few years, East Grand Lake has produced many salmon weighing more than eight pounds. Catching 15 to 30 salmon in a day’s fishing, is not uncommon for East Grand Lake.

The salmon fishing season in Maine starts in late April and lasts until June. However, during the summer when the water is warmer, particularly in the months of July and August, salmon tend to go much deeper into the lake as they prefer colder water.  The preferred salmon fishing technique during these months is drift fishing, in which you use a lead core line or downriggers.

Salmon is the common name for Salmonidae. Several other fish in the family are called trout. The difference is said to be that salmon migrate and trout are resident.

Typically, salmon are anadromous: they are born in fresh water, migrate to the ocean, then return to fresh water to reproduce. However, there are populations of several species that are restricted to fresh water through their life. These are know as Landlocked Salmon.

Spring is the easiest time of year to catch a landlocked salmon. In the begriming of Spring the water temperature in East Grand Lake is the same and the fish can be found at different the depths, as well on top of the water. Just dragging a streamer fly on a fly rod behind a boat can catch many salmon.

In Spring the brightness of sunlight affect the salmon more than anything else. Salmon do not dilate their eyes, so brighter days may cause the Salmon to seek dimmer water.

The two most popular methods for catching salmon in the spring on East Grand Lake are live bait and trolling with streamer flies.

Get Free Fishing Tips Delivered to Your Inbox ...