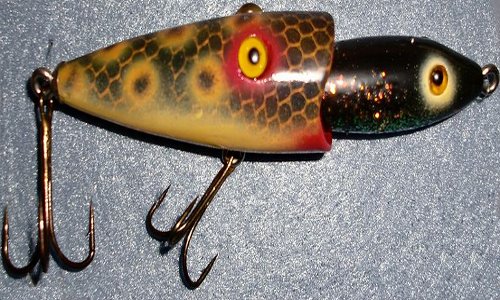 Fishing lures are specifically made to attract certain types of fish, using the type of ‘bait’ that a species would normally prey upon. The type of lure is important, as well as the movement of the prey & the manner of the manipulation of the rod or reel that is being used, in order to resemble it’s natural motion, or vibration in the water. A ‘popping’ action is also a common method used to attract the attention of fish, to get them to ‘bite’ and then be hooked in the process. Fishing lures are sometimes engineered to appeal to a fishes sense of territory, curiosity or aggression. Most lures are made to look like dying, injured, or fast moving fish.
Color is an important component of fishing lures as well, since it is scientifically proven that fish do see in color.  Their retinas, as in the eyes of humans; the layer inside the eye that determines how & if we see color, contain the same 3 chemicals making up ‘rods & cones’…fish possess  a 4th one that we don’t have which is common to other predators as well. Apparently, fish see colors that we can’t…, and this extra chemical also allows them to see colors in the ultraviolet spectrum.
Other factors that affect a fishes ability to see, are that they have extremely poor long distance-vision, yet amazingly acute vision close-up; due to the fact that their eyes are located on the sides of their heads.  This differs from human sight, because fish do not possess binocular vision, however; this seems to be alleviated by their retinal shapes…the same engineering that was the inspiration used in the formulation of the ‘fish eye’ lens.

Another consideration is how sunlight…or the lack of it, affect what fish will see. With more sunlight there is more reflection from underneath them surface of the water; creating a ‘mirror’ effect.  Conversely, on a day without much sunlight this effect is not present & these differences should be taken into account when choosing the type of lures used, because of the reflective qualities of the colors, (including fluorescent; an advantage if implementing their use, due to their ultraviolet qualities).  The old adage is still true today…”Bright day, bright fly” & “Dark day, dark fly”; refer to the differences that occur with low-light vs. bright, sunlit days, & how fish see & perceive them.

For example on a ‘Dark Day’ less color is visible to a fish under water; this creates a similar condition as in a photograph that’s black & white, where in that case a fish is relying on the contrast of the shape of an object to determine whether it resembles food or not, and they are better able to see darker objects vs. lighter ones. Some of today’s lures employ ‘day-glow’ color technology, that still absorb light even on a dimly-lit day.
In contrast; on  a ‘bright’ day there is also the consideration of how the light reflects on the surface of the bottom of the lake, river, or stream; affects what fish see. What occurs, by virtue of the bottom-surface’s composition; is that sunlight creates a mirror-effect that reflects that image of the bottom back up to the surface, making it more difficult for the fish to distinguish whether an object is food or not.  Fortunately, the sunlight will light-up objects that are ‘suspended’ in the water in a fishes view.
Fishing lures can be made of wood, plastic, rubber, metal, cork, and materials like feathers, animal hair, string, tinsel and others.
They can have many moving parts or no moving parts. They can be retrieved fast or slow. Some of the lures can be used by themselves or with another lure.

There are many types of fishing hooks, that lures are fabricated with, they are categorized as ‘single’, ‘double’ or ‘treble’ hooks.
When ‘Catching & ‘Releasing’ fish caught on East Grand Lake,  the hooks are generally left in the mouth, cutting the wire only.  The hook will be naturally expelled by the fish over time, however; the use of non-corrosive steel hooks is discouraged since the corrosive type expel the hook more quickly.

Learning to cast a fishing line, is another important skill that a fishermen can use to charm a fish to bite.  This is done by the method of repeatedly ‘casting’ & ‘retrieving’. In order to correctly replicate the manner in which a fish acts in the water, the way an angler retrieves his line is important to the success of imitating the motion a particular type of fish uses underwater. The manner in which a fisherman retrieves can also be key when attempting to ‘lure’ fish out of the obscure places in which they hide, namely under logs or on ‘flats’.

Water reflectivity can also affect the quality of the image that fish are seeing through, and how clean a body of water does affect it’s transparency. Turbity which is defined as how cloudy or hazy water appears is an important measure of water quality and is measured by a device called a Secchi Disk. The disk is mounted on a pole or line, and lowered slowly down in the water. The depth at which the pattern on the disk is no longer visible is taken as a measure of the transparency of the water. This measure is known as the Secchi depth.

**East Grand Lake, Maine **is considered to be a very clean & high water-quality lake; with high degree of transparency.  This factor determines how fish in East Grand Lake are reacting to the things they see in the water & whether they consider those things to be edible.

Get Free Fishing Tips Delivered to Your Inbox ...