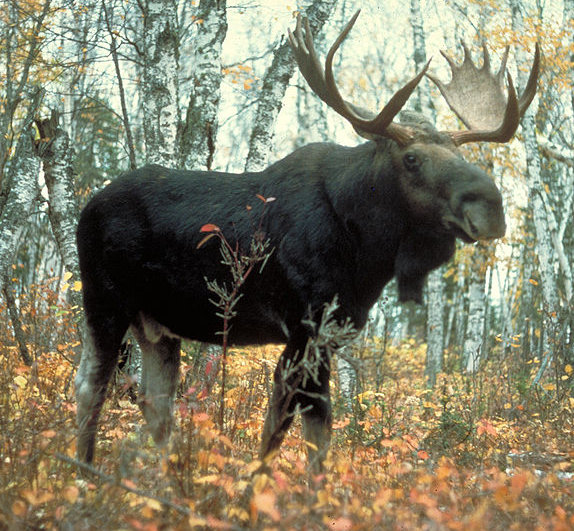 Maine is lucky enough to be one of only a few states in the U.S. with a sizeable moose population. The Maine moose population is estimated to be around 30,000. That’s the second largest concentration of moose in the country.

Moose, because of their massive size, find it easier to move around in open areas making it fairly easy to see one. They can often be spotted along logging roads, looking for food in wet boggy areas, around gravel pits, and trotting down ATV, hiking or snowmobile trails. We see moose regularly, meandering by our house on East Grand Lake.

For many visitors, catching a glimpse of the iconic Maine moose is a once in a lifetime experience. They are an impressive sight, and the opportunity to capture one on film is always exciting. Did you know that a mature bull moose can top the scales at 1000 pounds or more, and their antlers span an average of five feet?

Moose can be seen throughout the state of Maine, but their population is great around East Grand Lake. The best time to spot moose is at dusk and dawn from mid-May through July and again in the fall during their breeding season. Fall is also when the impressive antlers of the bull moose are fully formed. They will shed their antlers in November or December and new, larger antlers will begin to grow in the spring.

Moose are not usually aggressive towards humans, but can be provoked or frightened to behave with aggression. In terms of raw numbers, they attack more people than bears and wolves combined, but usually with only minor consequences. When harassed or startled by people or in the presence of a dog, moose may charge.  During the fall mating season, bull moose may be aggressive toward humans due to the high hormone levels they experience. Cows with young calves are very protective and will attack humans who come too close, especially if they come between mother and calf. Unlike other dangerous animals, moose are not territorial, and do not view humans as food, and will therefore usually not pursue humans if they simply run away. Like any wild animal, moose are unpredictable and should be given a respectful amount of space.

Get Free Recreation Tips Delivered to Your Inbox ...