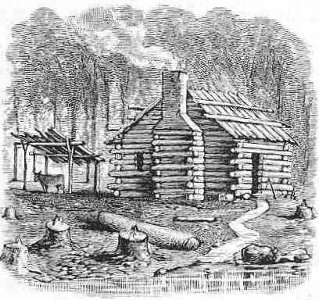 Log cabin building is a type of construction that has been around since this country was begun in the 1600’s, and was used for centuries in Europe; prior to the Pilgrims settling in this country. In colonial American times, settlers built ‘cabins’ made from trees cut into timber collected from forests, using  2-man saws. These saws were very long, measuring 12-14 ft. and sometimes even as long as 16 ft. thus requiring 2 men to operate them.  The ‘teeth’ of the saw were designed to keep the saw free of sawdust while cutting the trees. and while binding of the saw was a common problem; “sawyers”, (the term used to refer to craftsman who worked with wood); had to develop methods to deal with these issues.

Improving the efficiency and techniques they used, was necessary in order to produce them quicker due to the growing population of  European immigrants.  The logs were then used in their mostly primitive state; after stripping the bark off by hand; with sharp-edged tools called draw knives. Some purists still use this method today to erect log cabins in the same style that was employed when there were no other methods available to them.  As log cabin construction evolved, ways to improve the structure & efficiency were developed to gain the most insulation to save heat & reduce the amount of firewood needed to keep the occupants warm during the long, cold, New England winters.  Structure was important not only to keep the elements out, but these buildings were also built with durability and strength in mind, for keeping the family who lived in it free from harm & safe from intruders such as wild animals such as bears, &  the native Indian tribes that had become dissatisfied  with the way that the settlers were handling the land & treating their people.

Get Free Log Cabins Tips Delivered to Your Inbox ...